Know Tip Policies Before You Take a New Restaurant Job

Waiters love tips — so long as they’re the ones collecting them. But when it comes to sharing tips with fellow restaurant colleagues, or tipping out, some members of the wait staff aren’t so enthusiastic.

Tipping out and other policies vary from restaurant to restaurant and can have a sizeable impact on a waiter’s take-home cash. Open tipping, which allows diners to tip as much or as little as they wish, or fixed-rate tipping, which applies a service charge to all bills, can change the servers’ experience in the dining room.

It’s All About the Tips

Tipping is at the heart of your job as a waiter. In some ways, it’s how you measure your performance. It lends a certain excitement to the job and often contributes to the lion’s share of your money. If not for tips, why would someone who typically makes less per hour than it costs to buy a gallon of gas continue in the industry? The New Yorker reported that restaurant workers in the United States collectively make $25 billion a year in tips.

But the money left on the table for a job well done gets deposited in more pockets than just those of the wait staff. It may go to bus people, bartenders, dish washers and even the chef, depending on the restaurant.

Waiters at The Wolf’s Lair Restaurant in Dobson, North Carolina, might pull in $24 in tips per table on a weekend night shift and see upwards of 150 diners in the restaurant. But a bus boy gets a cut on Friday and Saturday nights.

“We pay him $10 to $15 per waiter at the end of the night to make sure he’s taken care of,” says Chad Easter, waiter at the restaurant. “The way we look at it is if we take care of him, he’ll take care of us.” A flat-rate tipping policy changes the front-of-the-house and back-of-the-house relationships, with reduced disparity in potential income and less dependence on wait-staff performance. The same is true for tipping out bartenders.

At Evans Street Station in Tecumseh, Michigan, bus staff receives 2.5 percent of servers’ net sales, and the bartender receives $1 for every $25 a server sells — both come from the waiter’s tips. There’s no payout to the kitchen staff.

That’s the way it has been since Evans Street Station opened, according to Justin Yovanov, general manager. He reports it’s more likely the wait staff will tip out the kitchen staff if a chef owns the restaurant to better compensate the staff for its efforts.

According to Easter, a chef-owner is also more likely to require tipping out back-of-the-house staff if the chef is paid hourly.

European Flat-Rate Tipping Arrives in the US

A debate rages between front-of-the-house servers, who feel they earn every penny of tip money, and-behind-the scenes workers, who also want to be compensated for the work they do, about setting a flat rate for tips on all checks to be distributed evenly among the staff. The fixed service charge, or flat-rate tip, is popular in Europe but receives mixed reviews here. In some operations, flat-rate tipping is becoming standard. 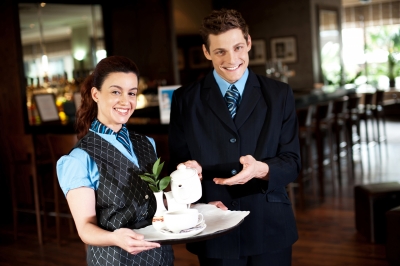 Last fall, Thomas Keller, a chef who has opened successful restaurants including The French Laundry in Napa, decided to institute a flat-rate tip at Per Se in New York City. It’s designed to level the playing field among all employees and give behind-the-scenes workers a leg up in the business, according to Keller.

All the various tipping policies have advocates and detractors. Be sure you know your restaurant’s policy before starting a new job. If you’re in it for the money, you’ll want to understand not only how you’ll be tipped, but also if you’ll be expected to share.